The measure of a life


So. I lost my step-dad last Friday.

People who don't know me or our family well assume that means that my mom's husband, who was not my father, died and that while I'm sad, it's not--as someone said to me--my father that died.

I know this, because 11 years ago my father, the man who was biologically responsible for my life, and with whom we lived for the first 16 years of that life, did die. And it was hard. It was hard for me to have to give up months of my life caring for someone who had hurt me--and my precious mother-- badly, repeatedly. It was hard for me to care about his eternal well-being, and the fact that that was was hard hurt me, too. But, I wasn't sad that he was gone. I was, to tell the truth, relieved. He could do nothing else to hurt me. He couldn't hurt my children, my brother, my nieces, or my cousins.

But this. This is a searing pain.

John Ronald Harris came into our lives sometime around my 18th birthday, give or take a few months. He was good to my mother and made her happy. He was nice to me and to my friends. As the months, and then years went by he became part of the fabric of our lives. He gave advice, whether I wanted it or not. He teased, but without the cruelty that I was used to.

There was no struggle for me to accept him in our lives. He had that relatively easy, because we all were love-starved. It took me longer to really trust him, but that did come after a few years. As I struggled through my early college years, he was there, supportive for my mother and I both, and treating me as though I was his child, even--when I was having problems--upset about someone messing with "one of his kids."

So when he and mom got married, just less than a year after Colin and I did, I was delighted. I was happy for my mom. I was happy for us. (At that point I didn't know his kids well, but they seemed nice enough.)

That was over 28 years ago. In those 28 years, he paid for the college education that my father was supposed to have helped with. He watched my three year old daughter when she had the chicken pox, so that I wouldn't miss class. He put up with having the kids and me in his house for weeks at a time during various moves. He gave advice, whether I wanted it or not.

And we all grew to love him. Tremendously.

He was generous. One of the most generous people I have ever known. We enjoyed wonderful vacations with my step-siblings that we could never have afforded if he hadn't helped to offset everyone's costs. He gave low interest loans for home down-payments. He was always helping someone out. Many years ago, he and my mom requested that in lieu of Christmas gifts for them we make charitable donations. That is how he was.

And with him we got a, big wonderful family. I got to know his mother well enough that I mourned her passing. I got older brothers and two sisters, and over the years they have brought a richness of in-laws and nephews. We got Godsons and all kinds of other interesting family connections. Most of all, we got a whole bunch of people to love. Brad, Susan, Curt and Brenda shared their father with us unstintingly, and for that I am forever grateful.

To my children, he was "Grandpa Ron" when they were little, changing to "Grandfather Dear" as they got older. It was an incredibly special relationship, and he always treated my children and my brother's girls exactly the same as he did his grandchildren-by-blood. One of the wonderful gifts God has given us in these last months was to have Wicked (explanation here) present at two of my sons' weddings in May.

Over the last several years he showed us all a wonderful example of courage and faith. As his body got weaker, he kept fighting, and kept living. Instead of getting crabby and bitter, as people so often do when they are wracked with pain and know that death is nearing, he got sweeter and more concerned about all of us. He was sure in his faith, and knew his eternal destination, as did all of us.

I will miss his presence. His bad jokes. The hard time he gave me when I would call on the phone. His many, many emails. And all of the advice, whether I wanted it or not. 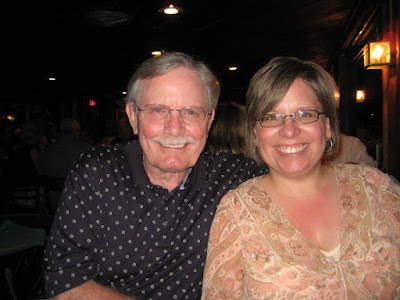 The treasure of a life is a measure of love and respect,
The way you live, the gifts that you give
In the fullness of time,
It's the only return that you expect
The future disappears into memory
With only a moment between.
Forever dwells in that moment,
Hope is what remains to be seen.
The Garden-RUSH
Posted by Jane at 8:39 PM 7 comments