Yes, I did find something to wear for Easter. I was going to head back to Von Maur and try on a scary-expensive dress and jacket, but decided first to try Burlington Coat Factory. I had never been in there, but a friend suggested it, so I went.

First, I was surprised at how nice it was. I was expecting the chaotic warehouse shopping experience, which I hate, but it was very well-organized and pleasant inside. The first dress I saw was $29.99. It was one of the two dresses that I had tried on at Von Maur. Same fabric. Same brand. The price at Von Maur was $69. Whoa!

I wasn't seeing anything, until I walked all the way past the clearance stuff to the edge of the department. I saw a couple of racks of ladies suits and two-piece dresses. Jackpot! I found a warm cream two piece dress that looks decent and cost a fifth of what I was willing to spend. I need to get some shoes, but that shouldn't be hard.

It also should look good with the hat that I fell in love with. 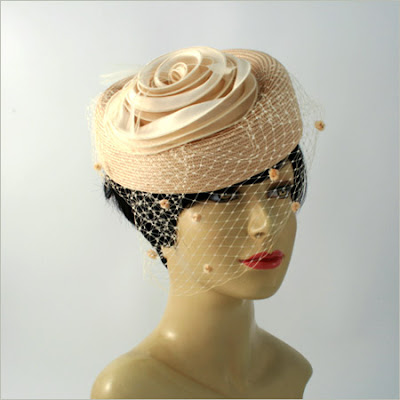 Bravo! I love the hat, too. Gorgeous. I'll be wearing this in chocolate-brown (not green!) lace on Good Friday:

But I don't have a hat for Easter morning.

Ooooh, I like that EC. Very nice.
I have a vintage black bit of something that I may wear for the Tre Ore on Friday.

Okay, so... here in the U.P. of Michigan, we are not blessed with Jefferson Pointe, or for that matter, Burlington... so I am not coveting... really... not going to happen. We have a BIG K (which I can't figure out what the Little "K" would have been)- and we have teens, so we know NEVER to step foot into any store called "K".... and we have a WalMart (built a year ago- happy for that), not so good in the fashion department... Really, a trip to the city (2 1/2 hours to a mall) is in order! Then again, economics... shoot... Shopping online is no fun, can I join you for a shopping trip and coffee stop?!

Don't I use those three dots WAY to much!

Enjoy your Holy Week as you look good in your suhwheat hat! I am not coveting! Not! Bless you!