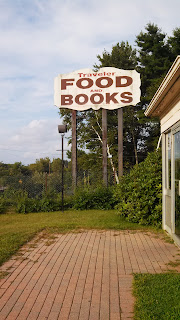 This is a very strange restaurant in the smallest town in Connecticut. I know about it because this is where my friend Lori and I waited for a ride and a tow truck when my car misbehaved on the way home from visiting my daughter in New Hampshire. There was an old car full of young hippies/woodsmen, too. With dogs. And a guitar.

The whole thing was very surreal.

But we made it home, back to normal life, and all is well. Except at the grocery store.

First, I only ever go to this particular store because they carry the yogurt that I prefer and generally have better produce than the closest one does. Today they were out of the yogurt. The lettuce was six days past the sell-by date. They were out of the fresh green beans that were on special. They were out of salted butter. They no longer carry good parmigiano. So I was already feeling like I would have been better off at the store closer to home.

In the check-out line I was disappointed because the rather surly cashier didn't ask if I had found everything, like they usually do. I was ready to give her the list. After I paid and as I prepared to take my cart and leave, I felt something slam into my back and knock me into my cart. 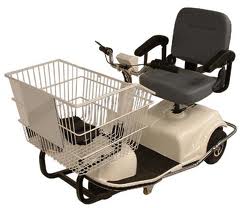 It was a motorized shopping cart. One of the people of Walmart--we saw a few today, or maybe it was pajama day at the grocery--appeared to have escaped and was at Kroger, allowing a two year old boy to help her pilot the cart.

Yes. I was hit by a motorized shopping cart. I have a bruised back and a sore neck, knee, and ankle, too. I feel like I did when I was rear-ended at low speed. I'm probably going to have to make some visits to the chiropractor.

One of my friends said that the weirdest things happen to me. Yes. Yes they do.

I wonder if you could sue...