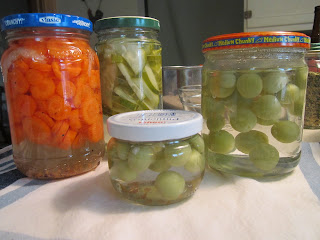 I'm still trying to get over my cold, but I couldn't take sitting still today. I decided that being outside and getting my vitamin D would be a good idea. I did some more work in my garden and ended up with a lot of little green cherry tomatoes that had fallen on the ground or were growing in spots where they ended up sitting in the dirt.

Yesterday I found a recipe for basic brine and I pinned it so that I would be able to find it when I needed it. I decided that I needed it today. I like something zippy with most of my meals, so we go through a lot of pickles. I'm determined to fill as much of that need from my own garden as possible, so it seemed like a good time to get started.

I didn't have the time, inclination or energy to can today, so I just played a little with some refrigerator pickles. The big jar of the green tomatoes is just brined. The smaller jar has brine and red pepper flakes. I discovered that I had twelve pounds of carrots and part of them were needing to be used, pronto. So I sliced up a pound of them and combined them with some sliced onion, garlic pepper, and red pepper flakes. The cukes are just in brine and garlic pepper. I did them mainly to see how they would turn out.

Tomorrow, if time permits, I am going to do some bread and butter pickles and a couple of small jars of squash pickles and beets.

I love taking the goodies that are coming from the garden now and doing tasty things with them to keep them for the winter.
Posted by Jane at 7:22 PM